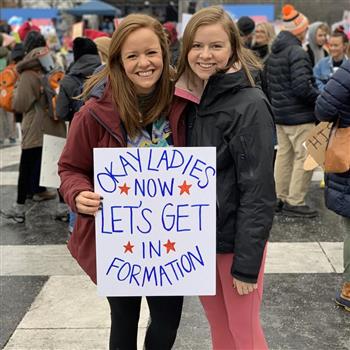 Abby & Callie are running a marathon!

Abby and Callie are running a marathon! We are excited / scared / already sore to announce that we will be running the 2020 Chicago Marathon on October 11th of this year. We are even more excited, and quite proud, to be spending the next eight months not only training but also fundraising for the Multiple Myeloma Research Foundation (MMRF). Abby and Ginny (mom) fundraised over $6,000 for the MMRF during the 2015 Chicago Marathon, so we wanted to see if we could meet that or top it (adjusted for inflation) this time around.

The MMRF champions and funds research to ultimately find a cure for multiple myeloma. Multiple myeloma is an incurable cancer of the blood plasma that affects bone marrow which includes marrow in the spine, pelvic bones, ribs, shoulders, and hips (these are all bones, so this makes sense). While cancer of all types is offensive and unacceptable to us, we have a particularly adversarial relationship with multiple myeloma. Cut to…

Jerry “P Dawg” Conners: a man we love with a nickname he hates

Our sweet P was diagnosed with multiple myeloma in 2002. He underwent chemotherapy and a stem cell transplant at Northwestern Memorial Hospital in Chicago, with multiple complications along the way. He ultimately went into remission (great) and was given a prognosis of three to five years (less great) which was consistent with other people living with multiple myeloma at the time. Seventeen years later, our dad is still living in remission, which feels to us like a miracle sometimes. While some of that is luck and circumstance, a huge part of this feat is due to the incredible work that the MMRF supports. They’ve pushed for the development of new therapies, including eleven new drugs that have been approved in the time it usually takes to have one new cancer drug approved. Nice one MMRF! It once took me (Abby) fourteen months to pay a parking ticket, so, really, kudos!

The MMRF has helped to make multiple myeloma a more manageable cancer. And we owe every school lunch (after Jer took them over post-IBM), carpool, kindergarten / fifth grade / eighth grade / high school / college graduation together, cross-country road trip, NCIS marathon, monologue about our “ancestors”, lecture about doing the dishes, University of Illinois football game, totaled GMC Yukon XL, chocolate chip pecan pie, and “You have six daughters? You’re a saint!” since 2002 to the research that they fund.

Thank you for reading and thank you in advance for your generosity in supporting us. We appreciate it endlessly and really believe in what we’re running for!

9. CPChloe Philion
What an amazing family! You got this!!!

10. ELEmma Liedlich
Love you girls! So so proud of you 💕

12. SLSarah Liedlich
Love you my beautiful soul sisters! 💕 so proud of the women you are.

15. LJLogan Johnson
Such an inspiration! Love you!

16. CHChristi Hartigan
Way to go Callie and Abby, a great cause for sure.

Thank you to Our Sponsor