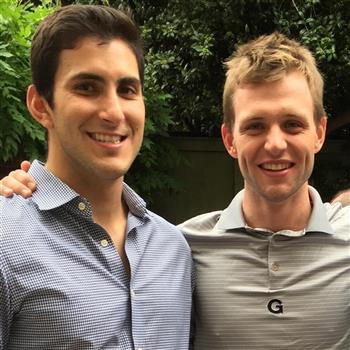 As many of you know, my dad was diagnosed with multiple myeloma in November of 2016. After several rounds of chemotherapy, he underwent a successful stem-cell transplant in May of 2017 through which he achieved a stringent remission. Since then, he has undergone further rounds of chemotherapy and radiation therapy and is currently receiving weekly maintenance chemotherapy to improve the likelihood of a sustained remission. On November 4th, my friend, Quinn O’Malley, and I will be running the TCS New York City Marathon to raise money for the Multiple Myeloma Research Foundation.

Quinn and I met our freshman year of high-school and were immediately friends; he quickly became a pseudo member of the Marshall family, spending a significant amount of time with us over the past eight years. When my dad was diagnosed, Quinn was one of the first people to call, offering support to both me and my family. A few months ago, while discussing my desire to run the NYC Marathon and raise money for the MMRF, Quinn suggested we run the race together to support my dad.

Multiple myeloma is the second most common blood cancer and has one of the lowest 5-year survival rates of all cancers. However, in the past decade alone, the Multiple Myeloma Research Foundation, along with its network of partners, has achieved tremendous success in fighting the disease. As a result of the MMRF’s efforts, the FDA has approved ten new treatments – including four in the past 18 months – an unparalleled track record in oncology.

The mission of the Multiple Myeloma Research Foundation is to relentlessly pursue innovative means that accelerate the development of next-generation multiple myeloma treatments to extend the lives of patients and lead to an eventual cure. A remarkable 90% of the total MMRF budget goes directly towards research and related programming. For the past eleven years, the MMRF has earned Charity Navigator’s 4-star rating, putting it in the top 1% of all charities.

Quinn and I have committed to raising $25,000 for the race and ask that you please take this opportunity to support a truly incredible cancer organization!

3. TThe Makins
Well done Jenkins and for a very important cause!

5. LPLaura Pellegrino
Great job you guys. !! All the best The Pellegrino Family

7. JCJudith Cooper
Congratulations on the marathon. Very proud of you

11. TTHE COLLINS FAMILY
Way to go, Jenkins! We'll be cheering for you! All the best from the Collins Family

14. DODennis Olmstead
Run for a cure! We'll be there supporting! The Olmsteads

16. EOEllen Oppenheim
Great effort, great cause--we support you all the way to the finish line! Good luck and much love from all the Opps.

23. TThe Corcorans
Way to go! Happy to support you both in reaching your goal for such a worthy cause.

24. ?Anonymous
May the road rise up to meet you. May the wind always be at your back. May the sun shine warm upon your face, and rains fall soft upon your fields.

25. chColin Harrington
Good luck to you and Quinn!

27. TThe Allinsons
Good luck to you both!! We'll be thinking of you on Marathon Day. Xo, Allinsons

29. RRexer Family
Quinn and Jenkins, best of luck on your mission to raise funds. Amazing job. I'll see you on the run.

36. BBill & Linda Vitiello
Jenkins, Your Dad is in our thoughts and prayers. Linda & Bill Vitiello

37. NMNancy Montgomery
You're the best, Jenkins! xo The Montgomerys

45. MNMarie Naisby
Proud of you Jenkins and Quinn Love, Grandmom

51. TThe Shaw Family
Run Jenkins Run!! All our love and support to you and your Dad!

54. RGRoy Grossman
Sending you, Quinn and your Dad lots of positive energy.

55. AMAlice Mahoney
Go Jenkins! I look forward to hearing about the Marathon and the important support you are giving MMRF and your amazing Father. Thanks to Quinn too!

60. MTMarc Tabah
What a team! Best of luck to you both in your training and fund raising. We love your Pop and will be there by your side.