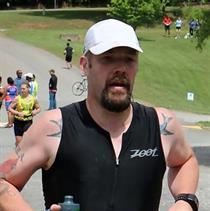 It was 15 years ago on a climbing trip through New York and New Hampshire with a couple of friends that I stumbled into the IronMan Lake Placid. Three dirty guys and a stinky dog wandered into an amazing place full of positive energy and excitement for every competitor entering the finishing area until midnight. The only way I can describe it would be – inspiring.

That inspiration has stuck with me and I have repeatedly told myself that I want to compete in that event. Following my newly adopted mantra of JFDI, I am doing it. I have officially registered for the 2017 IronMan Lake Placid on July 23rd. For those not familiar with what an IronMan triathlon entails – it is a 2.4 mile swim, a 112 mile bicycle ride, and a 26.2 mile run.

I wanted some accountability in moving forward and completing this challenge and have entered through the Charity Partner Entry supporting the Multiple Myeloma Research Foundation (MMRF). Training for this is event is going to be a challenge, but nothing compared to the challenges faced by patients with multiple myeloma. Multiple myeloma, currently an incurable blood cancer, is the second most common blood cancer after non-Hodgkin’s lymphoma. Based in the U.S., the MMRF is one of the most highly regarded cancer foundations in the world. They are the world’s largest private funder of multiple myeloma research and nearly 90% of the funds raised by the MMRF are budgeted for myeloma research and related programs. And the MMRF is in the top 1% of all charities, having earned Charity Navigator’s 4-star rating for the past eleven years in a row.

So many people I know have been impact by cancer in one way or another. Whether themselves personally having to fight the disease, supporting a friend or family member in their battle, or coping with the loss of a loved one. I have personally had to deal with it multiple times with my friends and immediate family and know how bad it sucks. This is one way I can try to help prevent someone else from having to go through that process as well as prove to myself that I can complete something this grand.

I have set a minimum goal of raising $5,000 and ask for your help in achieving it. All US donations are tax deductible and you will receive confirmation from MMRF shortly after making the contribution. So please help me raise the money to help a worthwhile organization and prevent other people from having to deal with cancer.

2. ?Anonymous
Sean - saw your # while you passed me doing IMLP this year and wanted to commit a random act of kindness. Congrats.

4. SLSheldon Linn
Glad you are going the distance for a good cause !

7. JMJeremiah McAward
Best of Luck, Sean! Lots of people are pulling for you...
8. EDEileen Daniel

10. EPEric Poole
Good Luck!!!
11. ESEileen Seifert
This is such an important cause that impacts so many, and frankly cancer sucks! I wish you success in both your race and your fundraising efforts. Blessings.

12. JSJennifer Seymour
You got this Sean, we are SO proud of you!! I've seen you running around town (I'm the nut honking the horn and waving out the sunroof) and your dedication is something to behold!
13. NNick Furness

15. KGKristina Gomez
Good Luck, Sean! We know you can do it!

16. NCNicole Collado
In memory of my mom. Thank you Sean! Best of luck!
17. KKate and Ron

20. DCDanielle Cloney
Thank you Sean for doing this!

21. JFJANICE FREEMAN
I am impressed, but not too surprised! You are always up for a challenge. During the race, just keep telling yourself "I am having fun!" I am sure there will be lots of good energy to keep you going.

29. PMPatrick Meola
My friend Wes is currently dealing with this. During one of your many miles on this day, please send him some positive mojo.

31. mmMatt Miskie
Wishing you all the best Sean - my son is a cancer survivor - wish i could afford more. Keep me posted !!!

33. AOAaron Ogle
I still remember you telling the story of the three dirty guys and their stinky dog, and now you get to join them! :) Keep up the hard work.

36. TTThomas Tiner
Sean - awesome to see that you are continuing to swing for the fences and supporting a very worthy cause!

51. CTCarmelle Terborgh
Proud to know you!
52. CBCarla Bilotta
Good luck Sean!!! I know my mom will be with you on this one!!! Tommy, Carla, Abby, and Pauly